One doesn't have to leave the U.S. to find varying public attitudes to animals. My Karen and I have noted with delight the weat coast openness to dogs on beaches and shopping streets. And in 1998 on my first trip to France I was thrilled to see well-dressed women with dogs at their feet under tables in nice restaurants. I don't know, maybe the Midwestern U.S. is a peculiarly uptight region when it comes to public dogs. (Or maybe any region where dogs "work" - that is, farm and hunting dogs - tends to keep them out of public spaces?)

It is a cliche that in India "cows are sacred" and so are allowed to roam at will. I have no basis on which to comment on that.

But I will note that in Varanasi especially, cattle and dogs are everywhere. Also, water buffalo; and goats. And pigs, though we did not see pigs in the streets so much. The cattle are the characteristic breed that I call (incorrectly?) Brahmin: I only had my cell phone for a camera, and both it and I are slow on the draw, so I didn't take a lot of quick, candid photos. (Today's photos are from Google images.) The photo op I most regret, animal wise speaking, was this scene which I shall try to describe verbally. It was, I think, on our drive into Varanasi. The scene is this: Storefront with a broad glass window and an open door; 2 poured concrete steps from street level to the shop threshhold; one cow and one dog, standing still with their forefeet on the top step, calmly gazing into the shop. What were they thinking? Whom were they waiting for? Why this shop and not the next one? It was a story begging to be told. Symbiosis? Again this is not my photo, but I enjoyed seeing so many cattle and dogs.

Now, the dogs do not appear to belong to anyone, anywhere. They are not ferocious or intimidating. It's just hot, and they're . . . well, in the dog days, I guess. The only dogs we heard bark were the (apparently rare) ones behind house-gates, protecting private property.

The cattle were everywhere, in and along streets of all sizes and busy-ness. Here's another picture I could have snapped, but didn't. I guess I didn't need to:

Cows may be "sacred" (that's for others to explain), but they don't seem particularly "clean" (in the western nor in the biblical sense).


All this free range livestock creates the obvious and expected in the streets. So, walking was never casual or careless. We were in sandals, after all, not in boots. And it made the customs declaration sort of complicated: "Are you bringing with you . . . (d) soil, or have you visited a farm/ranch/pasture outside the U.S.?" Well, technically, no. Functionally? I just left my response at the technical level, though I was still wearing those sandals. I grew up in farming country, and am not squeamish about barnyards. But those sandals never made it through the garage into the house upon my return. 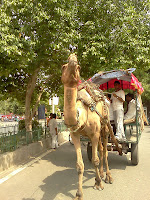 Finally, while we did not see an elephant in India (this alone might be a reason to return; or maybe just to head over to Brookfield Zoo), we did see camels! And this is my own photo!

[All other photos found through Google images, searching "cow and dog together India"]