For reasons to be disclosed at another time, my cycling goal this summer is built around “century” rides – day trips of 100 miles.

And because of that, I am thinking a lot this summer of my friend, Steve, “the first friend I almost killed on a bicycle.”

I met Steve 30 years ago. He was a leading musician at the church that hired me to be their pastor for worship. In August, 1985, Steve picked me up on his motorcycle, to take me with him to the Twin Cities summer choral music workshop. We stopped at Hiawatha Falls – with Steve there was always time for beauty and sight-seeing. I asked Steve if we shouldn’t take our helmets with us as we walked to the Falls. He seemed a bit puzzled . . . why wouldn’t we leave them on the bike? Well, I was on notice that I wasn’t in Chicago anymore!

But it was a different kind of bike that created a bond with Steve. And while we never rode together enough to suit me, Steve was my cycling buddy for a decade. He would call and ask “Can you come out and play?” That meant, ride! Then he would swing by my place across town and lead me on another adventure in the still-rural parts of Dakota County, Minnesota.

I had done a little touring with my brother, Lew. We didn’t carry much, because Lew’s wife and children camped with us along the way; we just had to ride. But Steve introduced me to touring with gear. And again, we did not get out together enough to suit me. But it was enough to teach me the basics. And it always felt safe to go with my unflappable, indefatigable, cheerful cycling buddy. I remember especially two three-day camping trips. Lots of stories; fond memories; a taste and a hunger for more.

Steve introduced me to the concept of the “century ride.” Three times we rode the Headwaters Hundred together—a century ride out of Park Rapids, MN, that crosses the headwaters of the Mississippi and rambles the surrounding lake country. 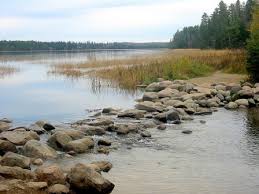 The Headwaters is held the fourth Saturday of September, and/so the weather is quite unpredictable. I think in my three trips with Steve, we got a little bit of everything.

Of course the day that stands out in my memory is the day I almost killed Steve. We were in Itasca Stake Park, on a one-way road through the beautiful autumn woods. 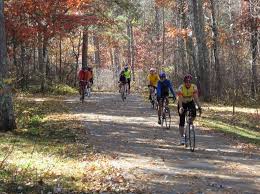 I was enjoying the downhill way too much for safety; Steve was pretty close on my rear wheel. (Our pastor, Roger, wiser and more cautious, was far enough behind Steve to avoid any potential hazard.) I hit a patch of leaves, and my front wheel turned under me; I went down, hard.

As I fell, I looked up and back and called out, “Steeeve” . . . Steve shouted, “Chuuuck,” and went over me. They call it a 360—he did a complete turn over me and landed on the dirt and leaves of the road’s shoulder, within inches, really, of the slightly raised asphalt edge. Roger rolled to a stop behind us. We got bikes off the road, and within moments faster, more intense cyclists roared by.

Steve was in trouble. It became clear that he was not going to get back on his bike. The next details are fuzzy for me. Somehow we got Steve to a place with an emergency vehicle . . . or did they send a vehicle to where we were? I should remember that detail. I do recall (to my discredit, I think) that once Steve was in the care of medics, and on his way to the hospital, Roger and I decided to finish the ride. We had more than half the ride left.

When we finally rolled in at the end, we met Jackie, Steve’s wife, and learned the extent of Steve’s injuries: broken collarbone, punctured thorax, and—well, something else I also can’t recall at the moment. He got home (a 4-hour drive usually, I have no idea how Jackie drove it the next day) and his recovery took 8–10 weeks.

This always amazes me. Steve remained a faithful friend, and still chose to ride with me. We only had a couple of years after that before I moved to Wheaton. Was it our last century ride together? I can’t even say that for sure. It definitely was not Steve’s last century. He made the trek most Septembers, and even got out on the course with grandchildren.

Steve’s final, fatal illness did not keep him off the bike. Last week was the second anniversary of his home-going. We had talked about me getting up to the Headwaters that September; it wouldn’t be the full ride for him, but another chance for us to ride together on this beautiful route. Steve’s family found a recumbent cycle so Steve could ride nearly to the end. His joy on his final ride, on his street, was lovingly captured on video; it distilled all the joy he got from and brought to cycling.

This summer, as I plan to ride six centuries, Steve is constantly on my mind. Among all the things I learned from him on the bike, that joy of riding, his smile under a bike helmet, is the most enduring.

Photo Credits: all photos from Google images. I cannot attest that the one with cyclists on an autumnal road are from Itasca State Park; I can say it is not the area of our wipeout. The Looney Valley Lutheran Church and its sign are one of my enduring memories from the second trip Steve and I took together. I love that name for a church. Also, as we rode through Looney Valley, the area farmers were harvesting corn, and waved us down to share their hot-dog lunch. Great day on a bike, great human experience, fun to see Steve work a crowd of strangers.
Posted by Chuck King at 9:24 AM No comments: