Perhaps a natural follow-on to yesterday's post, as the shop where I bought my souvenir drum was run by Sikhs! But let me not get ahead of myself.

I wanted to go to India because I admire the workers we would see there. I was glad the powers that be let me part of the team. Then, once that was settled, I thought, "you know, what I'd like to bring back from India is a tabla. [Warning - when you type "tabla" in an auto-correcting word processor, it will insist on making it "table." You just have to be persistent!] I have been intrigued with the sound of the tabla since the Beatles introduced Indian influences into their songs. Many reading this will know the sound, even if they can't name it. (Click here, and at least hang in there until the 25 second mark. If you're like me, you can't stop there. But you'll know the sound when it comes in then.)

So, anyway, that would be cool, to come back with this fabulous drum. (Technically, it is 2 drums.) It is very much a classical instrument in Indian music. As a practical matter, though, for me, it is probably a stretch to think I could learn to play this well enough to justify bringing one home.

And there is this other drum, which while more a folk drum nevertheless is ubiquitous and crosses over musical styles and venues. We saw it in play with temple musicians (part of the front line of this ensemble; I took this photo at Benares National University). 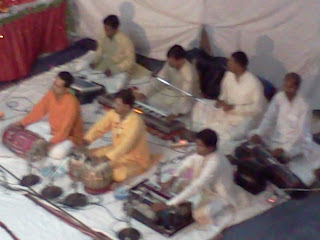 We saw it and tried to sing along in a Christian worship service. I am given to understand that if there is a drum in an Indian ensemble, it is likely to be the dholak.  (In this photo, the tabla player is front and center, with the dholak to his right, or on the front left of the photo. Other instruments include the harmonium - front right in the frame; the guy there is the leader of the group, and the primary singer. Back row, far left in the frame, is a kind of dulcimer, then 2 western keyboards, and finally what appears to be an electronic version of a traditional instrument . . . possibly the "drone" associated with the music.)

After sitting in a music shop, in the New Delhi Railway street bazaar, our second day in India, it was already obvious that maybe the tabla was not going to be my instrument. Later, as I learned that it is the entry-level Indian drum, and the most commonly used, my decision was made. To put it way too simply, this drum ismore or less the tabla, with both the high and the low drum combined, rather than separate. The smaller head plays the high, faster beats, while the larger head plays the lower, steady beats. As with the tabla, the bass head can be manipulated with the heel of the hand to raise the pitch, giving it that "bent" sound. So, on our final day in country, Philip took me to Old Delhi, to the music row, to shop for and buy my souvenir!

We stopped first in a western style music shop - think Guitar Center with one room designated for Indian instruments. There Philip and the room attendant played through an array of dholaks and then demonstrated many other instruments, from the sitar to the harmonium. We then wandered through the more western departments before hitting the street and its line of adjacent, smaller, more explicitly Indian instrument shops. By the 4th shop I had a good idea of what I was listening for and what look I wanted. And this shop had the right price as well. Mission accomplished!

Mine has metal turnbuckles instead of the rope - which would have been a nice touch but I decided would be too dicey for me to maintain. The heads are goat skin, and I bought replacements there so I wouldn't have to shop for them back in the States someday. They threw in a carry bag, and I had my personal carry-on item for the trip home that evening!

So now it sits in my house, and I have YouTube queued up for the next of the free dholak lessons by some guy who at least seems to know what he is doing, and is working a pedagogical plan. I'm eager to learn the pitch-bending technique - I could never get it in the stores, where it seemed like everyone else was able to demonstrate it! I may be the only one who will ever hear me play this, but it is a fun and treasured addition to my private collection of odd-ball small instruments I'm learning to play.