A 14-hour non-stop flight is no small deal. I guess it's not the longest non-stop in this world, but it's plenty long. For our team, this leg was preceded on the way out by the trip from O'Hare to Newark International; it was followed a couple of days later by a 1-hour jump from Delhi to Varanasi. Our return followed in reverse order.

Except, our journey to India included a 7-hour layover in Newark.

Here are a couple of things to appreciate about the Newark airport:
1) from it, you can see the New York City skyline. That's impressive, and it's nice. With a different group, or a group with different purposes, or just on one's own, a 7-hour layover should be enough time for a quick trip into NYC. Me? I'd totally do that.But seeing the skyline at least is a nice feature of hanging out.
2) say what you will about New Jersey. All I know is that at O'Hare, the people-moving carts move fast and annoyingly beep at pedestrians. At Newark, the cart drivers don't drive as fast, and actually say "beep beep." Sorry, Chicago, on this count at least, you lose.

Dr. Laurel quickly saw that we'd have to do something to keep students busy for a long layover, and the 3 adults put together a camera scavenger hunt, divided them into 2 teams, then relaxed while they set out to explore and photograph. Of course, this didn't take the 90 minutes we gave them, but it did establish that this long wait could be fun. Most of the rest of the time was filled with card-playing and napping.

The New Delhi International Airport (Indira Gandhi) surprised me by being essentially deserted when we deplaned. Where were all the people? Why was it so easy to get through this place in a city purportetdly so crowded with people? Oh, right - there they are, just outside. And so from a quiet, clean, spacious world-class airport, we walked into the heat, humidity, press and smell of India.

And dogs. Just, dogs, at the International Airport. Not on leashes, just hanging around. (Was that dog sleeping, as we entered the parking garage where the taxis picked us up . . . or dead? We are not agreed on that. Some say he was only mostly dead. Others, stunned or pining for the fjords.)

Two days later we went back through Delhi International, in the domestic terminal, and again were struck with how bright and fresh it is. Nice public art. Good services. Dark chocolates and Hersheys hugs all around: we were on to stage 2, the main destination of our trip.

Arriving in Varanasi was like walking into an abandoned movie set airport terminal. It was clean, bare of any amenities or services, and absolutely empty of people. A little eerie, actually. But quick to move through. The trip into Varanasi is a whole other post. 9 days later we were back in this aiport and found that it was as good and busy as any regional airport anywhere. (It is, in fact, an international airport; though hardly world class, as this photo may testify.) 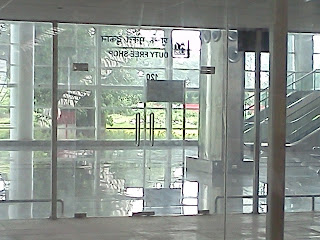 On our way home, we arrived back at Delhi International and were met by service personnel (airport or airline? I'm not sure) who ushered our group through all the lines and processes we had to get through. From the front door, through check in and customs, to the security lanes - someone made sure we were taken care of and knew what to do next. [In another post I'll comment more about the service in India; it is surprising, welcome, and plentiful.] Thanking our "usher," we assured her we would not be treated so well back in the States!

Newark on the journey home required a shorter stay, and at 4:30 in the morning, showed a seamier side as well. But there is this going for it: from Customs through Security, personnel were unfailingly polite and some actually cheerful. A public note to the Chicago TSA: I've always been offended by your attitude at both airports, and have to say, "Jersey does it better." Granted, O'Hare, your public washrooms are cleaner, and your halls shinier. But give me a smile over those fixable details, any day.

Still, home sweet home and all that. There is nothing like returning to the local airport after a trip like this. Be it ever so humble. "Beep beep" and all.
Posted by Chuck King at 1:57 PM