I am not a runner

I'm behind with a couple of cycling events/stories. But this weekend I had an "adventure" of a very different sort. "I am not a runner, to begin with. There is no doubt whatever about that." (to paraphrase Dickens) And I would not naturally show up for a 5k event unless it was required of me, for some reason.

This Saturday, it was indeed "required" of me, to show up in support of an excellent event that raises money for camp scholarships for disabled people and their families. STARS is an extraordinary ministry of my church, and as a staff person, the 5k run and fitness walk each June is one of my command appearances. I don't have to run, but I have to show up.

Last year, for the first time, I went one step beyond "showing up." I registered and walked the 5k route. And man, did that make me feel old! This year I determined that I was going to run, or at least lope. Maybe even just show up and knock myself out. Why take time away from cycling to get ready for a run that I won't enjoy, won't do again for at least a year, and which in any case was sort of imposed on me. Such is the true measure of my ignominy.

I have run, for exercise, off an on, more off than on, and not at all recently. I simply won't run when I am above a certain weight - it's too hard on my knees. But when I dropped below that weight a couple of weeks ago (on yet another diet) it occured to me that I could at least prepare to run, since I was going to be there anyway. But no, I would not overdo it, and would not take it too seriously. I am not a runner.

Training Week = Race Week
Monday - .9 miles. This is the distance of the loop that is my suburban neighborhood. Roughly a square, with its highest point at the top of my block, a long slope south, and along flat west and north, then a short incline to the top again.
Tuesday - 1.8 miles. Two laps.
Wednesday - 2.7 miles. You do the math.
Thursday - 3 neighborhood laps plus the block I live on, which happens to be .5 miles round. A perfect 3.2 mile run, which is as close to 5k as I can make it.
Friday - rest day. With my daughter I walked the race route, to get a sense of its contour and to see what 5k looks like all spread out, not in laps.

By Friday I was sore in my thighs especially, and while walking was easy enough, a lot of other things made me feel it. That afternoon, tired of not being on the bike, I decided to do a light spin, using a familiar bike club route. Keep it in the middle chain ring, nice steady cadence, and not pushing it. That worked well until about mile 7.5, when this guy pulled out of his neighborhood on a beautiful Merlin bike, and fell in behind me. He looked serious, and my latent competitiveness kicked in. I went into my large chain ring, and my cadence picked up just a bit. "This is stupid," I told myself. I had nothing to prove to this guy, and I should stick to my purposes.

He followed me to our first turn. I pointed out road hazards, and he called out "car back." At the turn, he followed, then took the lead. We continued on the same course, with just a few words between us, alternating lead and draft quite naturally and seamlessly. It was, simply, natural and delightful. Twelve miles later, our route diverged, and I returned to my original pace and plan. "That was probably dumber than I wanted it to be." My casual ride turned out to be 27 miles, nearly half of them in the large chain ring and in fear of being bested by a stranger.

Back home, I cleaned up, then rode my touring bike to the church for the Friday night part of the weekend events. So my day off included about 35 miles on the bike ... not all of them as relaxed as I had planned. But as I went to bed Friday, I realized that all the soreness had left the legs, and I had a great sleep.

Saturday morning I woke to rain. I walked the dog in rain. I gave up the idea of riding to church as my warm-up, for the rain. I changed my running kit for the rain. And at about 7:55, I stepped into the crowd of runners, in the rain, and waited for the gun. (Was there a gun? Now I don't really know. I'll be disappointed to know there was not a starting gun. There were church bells pealing though, and that is also pretty cool.)

I managed the first quarter mile or more without tripping over children or causing better runners to stumble. I had gotten some pretty sound advice from seasoned runners, so I was more alert than would be natural for me, to the dangers of the starting mob. Also to try to remember my pace and to watch the time at the minute marker, to check myself. Thursday's run in the neighborhood was about an 8-minute mile pace, for a time of 26:04. That would be my goal on this run.

At the 1-mile mark, 7:34. Oops, try to moderate. At the two-mile mark, 15:10. OK, but that's not much better. Somewhere in there I began to wonder if I'd have to really slow down, or even walk a bit. Memories of Cycling Boot Camp kept me moving. The 3-mile mark did not have a clock, and by then the finish line was in view ... up the final little incline. When I finally saw the finish clock, it was in the final seconds of minute 23. Oh man! Could I have come in under 23 minutes? Well, at that point I had only what it took to keep that pace and finish. Not even enough to help remove tag from my bib number.

And then, I was done. My first organized run of any kind. I am still saying, "not again until next year." But there is that little part of me - it comes out about a day after each challenging cycling event - that says, well I could work a little running into my routine. If only to run with son Andrew when he's home. Such is the fitness sickness. 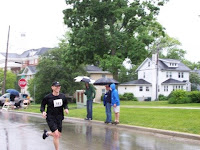